A long time ago, you would give a computer an intensive set of instructions - in assembly or something more sane, and it would compute these instructions one by one, but while it did that - it would “freeze up” you could not really do much else with it. At the time, computer hardware was pretty limited, it had a single CPU core (something that executes instruction sets) which did pretty much everything, one by one - computer scientists were not particularly satisfied with this, and they found a solution.

In essence, execution of two or more computations at the same time is possible - given it is guaranteed that both read data from the same source, but not writing which could lead to inconsistency, commonly known as a data race or race condition. Today our computers have multiple cores - they can do a lot more stuff than they used to, but we need some way to guarantee or make it really hard for this to happen.

The world of concurrency is fascinating, lots of languages design mechanisms around this problem known as concurrency primitives, allowing software creators to fashion applications and software systems that perform much better than their sequential alternative, however we are most interested in a cursory glance into the BEAM (Erlang’s virtual machine). For brief context, a virtual machine is just software - an abstraction over the basic hardware of a computer allowing a layer of execution on top of it. A common example being the Java Virtual Machine (JVM). The elixir/erlang source code is parsed and transformed into a set of intermediary files prefixed with .beam that the virtual machine can understand known as bytecode, via the C programming language. From here it is translated into assembly/machine instruction bits [1].

Most of the interesting concurrency primitives that erlang/elixir provide are built on top of the guarantees this virtual machine provides such as immutable state. The single basic unit being a process [2] [3] - an isolated sequential unit of computation which is managed by a scheduler an important construct.

The scheduler within the BEAM runtime (not an operating system scheduler), talks to the operating system via threads and manages the how and when of computations (processes - in the vm). It does something called preemptive scheduling which requires making a nuanced trade off - all processes are treated as equal(unless a priority is set) and given a tiny block of time/memory to execute, whether this is enough for a process is irrelevant. It sacrifices the efficient allocation of resources to processes that need it most to make some important guarantees which make fault tolerance possible:

This constant context switching gives guarantees creating a system that is dependable - allowing the creation of processes that inspect others, we can leverage this information to make intelligent deductions about what is happening within the system at runtime and design strategies to deal with and understand crashes and fail states, while also providing concurrent primitives that naturally scale across distributed systems, changing very little about the core system.

A typical illustration of erlang’s introspective superpower is :observer which ships by default. Pop :observer.start() into any iex session and watch the magic. 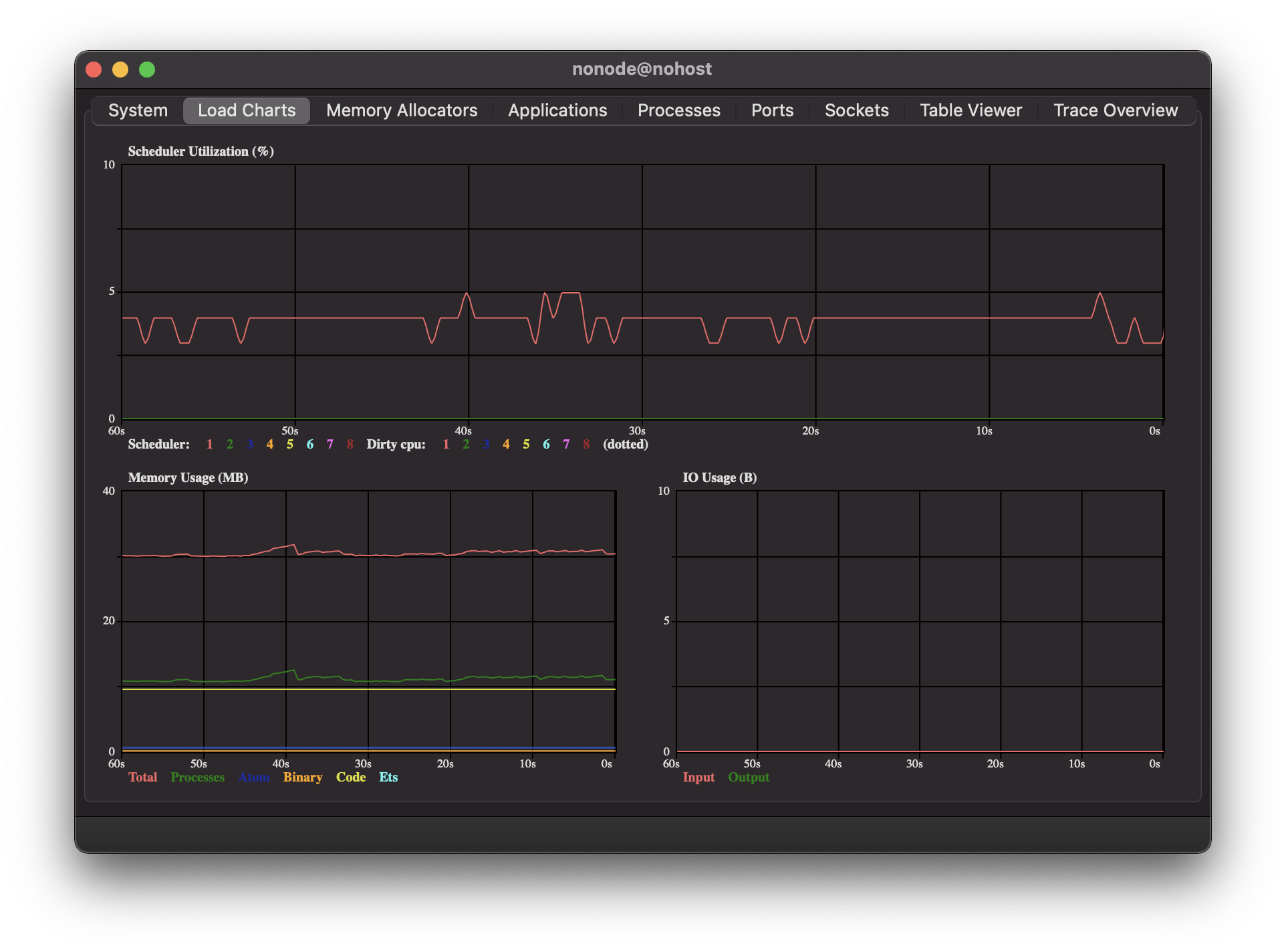 You can see the schedulers at work by spinning up a few short-lived processes which begin their lifetime[4] with about 326 words of memory (approximately 0.65 kilobytes) which can grow on a stack or heap.

Here you have self() as the iex session process, creating another process that it communicates with:

We can then leverage the high level Process library for convenience, to create more processes, thousands or even millions if need be:

Processes have an identity via their pid, this is how they are aware of one another. The return value of each child looks a little like this:

When the scheduler(on one core) sees these concurrent tasks, it allocates some time and memory at runtime to child and lets it run for a bit, if the process does not finish(an infinite loop for example), the scheduler moves on to child_two and so on, checking up on each process, computing a bit. Processes can be namespaced in a local registry for a single node to avoid passing around pids. Scheduling across multiple nodes works the same way, only you’d need a different way to manage the global name space of running processes such as erlang’s :global, gproc or swarm, depending on whether the system requires high availability or consistency at the network layer.

High availability and isolated failure states are achieved via messages propagated through a web of processes. Leading to interesting high level abstractions such as supervisors and agents for handling local inter process state.

It’s all about tradeoffs

Elixir provides a beautiful modern language that allows you to leverage the amazing ecosystem and novel concurrency ideas built into erlang, offering you the tools to create and design highly fault-tolerant, self-healing systems, sometimes at the cost of absolute runtime performance. You can see this with need to replicate data structures and performing computationally intensive tasks that would make sense to be processed sequentially. Do not despair however, you can carefully poke a hole into the runtime through the C interface via Native Implementation Functions, whether in C++ or perhaps rust via rustler. Or outsource this kind of heavy-lifting if required to a service in a different language. Let’s explore at a high level the conceptual underpinnings of relatively more popular languages and how they stack up against the BEAM’s approach.

Ruby, Javascript and Python all have different concurrent models and implementations, however they share some important similarities at a high enough level they can be grouped together. Ruby(MRI), CPython and Javascript’s v8 runtime(node.js) are all single threaded. Concurrency is achieved via a single Process(operating system) which has one large “main” thread(where the runtime is loaded) which creates smaller threads of execution within a single context(system resources - memory etc).

Node.js in particular was especially optimised with this design early on. The limitations here are somewhat obvious, utilising a multicore architecture is incredibly difficult and burdens the application developer with the nuances of lower level details you’ll simply not interface with in erlang/elixir. Ruby and Python historically however needed a mechanism called a Global Interpreter Lock(GIL) to enforce/sync the runtime and make a data race impossible. This is often called a mutual exclusion lock and the algorithm is plenty fascinating and deserving of its own article.

The primitives given are fairly similar - ruby gives you a Thread class and Fibre to create worker threads, node gives you access to the main libuv[11] managed Process and one for when you’re creating worker threads.

To utilise any form of thread parallel execution python provides a library interface, ruby core has been experimenting with and recently released an actor model inspired mechanism called Ractor.

In practice, when creating say a web server with these languages an Event Loop[9][10] [11][12] handles the heavy lifting within the main thread, resources are simply not shared and asynchronous failures caught with lots and lots of defensive programming.

In some ways erlang and go share some features of their concurrent model - both leveraging the symmetric multiprocessing [8] architecture with the key difference eloquently expressed by a deceptively simple philosophy:

Goroutines are analogous to “processes” being a lightweight “unit” of computation, however they have no identity(pid). This isolation ensures the only way data moves is through a “channel”, a departure from the concept of a mailbox that keeps track of immutable internal state, a channel serves the purpose of message passing between anonymous routines.

By opening a channel to some forgotten computation you can peek it’s state and enforce synchronisation.

Resources are shared with carefully crafted rules. The analog of a supervisor being a “monitor goroutine”. The sole writer of data in any cluster of spawned processes. This too is a form of message passing, just implemented with a kind of artificial immutability for workers. Runtime failures (panics) are rarer in go, and instead errors treated as values passed between goroutines. If panicked routines crash they inform the main go thread and the whole thing carries along swimmingly.

Reasoning about concurrency systems is somewhat trickier here but allows for performance fine-tuning if you can enforce mutual exclusion between goroutines. This freedom does come seemingly at a cost[6] which it seems all languages that do not enforce immutable data structures and performance fine-tuning an exception rather than the norm, but of course it all depends on context and use case.

Thanks to Ayomide and Daniel for reviewing early drafts of this article.